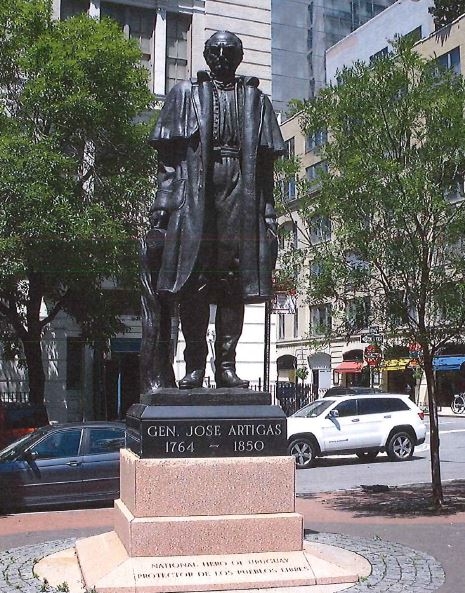 We’re excited to be selected by the NYC Department of Parks and Recreation to move and restore this monument of General José Artigas who has resided in SoHo Square since the 1920s.  The years have taken their toll.  We were awarded this project on the basis of our experience in moving large monuments and our skill in restoring historical sculptures. We’re looking forward to restoring the General to his original glory and returning him to SoHo Square.

The larger-than-life statue of Artigas in SoHo Square is a second cast of an original by José Luis Zorrilla de San Martín (1891-1975), which has stood in Montevideo, in front of the Uruguayan National Bank, since 1949. Zorrilla served as Director of the Uruguayan National Museum of Fine Arts, and was then considered his country’s outstanding sculptor. This replica was fabricated by Vignali and Company, and placed on a Uruguayan granite base designed by architect Maria Cristina Caquías.

General José Artigas (1764-1850), is a national hero of Uruguay. His sculpture is one of six sculptures honoring Latin American leaders which overlook the Avenue of the America.  They include Juan Pablo Duarte (1813-1876), considered the Father of the Dominican Republic, at Canal Street, and Brazilian independence leader José Bonidacio de Andrada e Silva (1763-1838) in Bryant Park at 41st Street. Located on the Avenue at Central Park South are statues of the Cuban patriot, journalist, and poet, José Martí (1853-1895), Argentine General José de San Martín (1778-1850), and South American liberator Simón Bolívar (1783-1830).